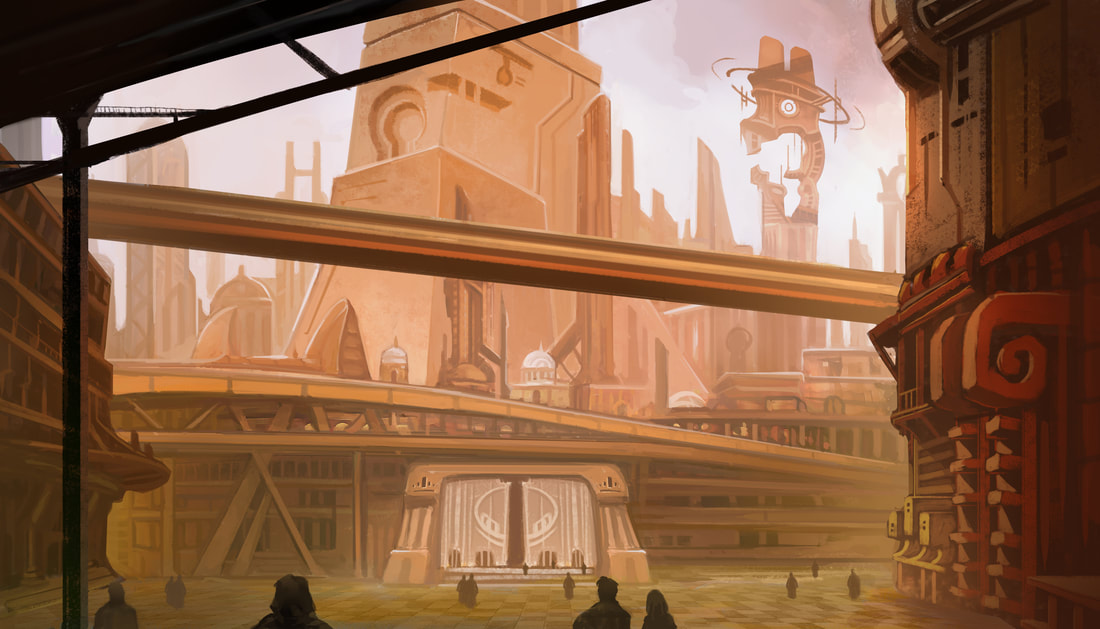 Kraagend is the capital city of Mesesh. This is where most of society lives. The run-down ruins are vast, and people make their homes here. There's plenty to scavenge, mostly just scraps. Rarely, functioning bits of technology from a world long gone appear. These are extremely valuable. The city itself is fairly bustling, though it may not look it from the outskirts. The shopping district is always busy, but many times the rest of the city looks bare and desolate. This is because many people live in Destinus, a walled city within Kraagend, and most activity wouldn't be visible from the outside.

Kraagend has a fairly high rate of crime, but it depends on your definition of crime. While the Kraagend City Council and its seven Judges don't do much to enforce the laws that actually damage people, it's not unlike them to dole out harsh punishment for the pettiest crimes. Like many others, the Judges hold a harsh suspicion of anything magic or tech, so try not to get caught out and about with those kinds of artifacts. Avlets and their use to society as a whole are the only exception, and are heavily regulated because they are so vital to the way of life these days.

As judges don't do their jobs as originally intended, living in Kraagend can be fairly treacherous. A larger population means more people with ill intentions. But, as water is often hard to come by outside of Oases, many have no choice but to make their homes in Kraagend. Life in Kraagend is not easy, but it is necessary.

Destinus is a walled city inside of Kraagend. Originally, Destinus was the most intact building left from the Old World in Kraagend outside of the spire. It was a small apartment building and the rooms inside were quickly claimed by those who wanted security. As their families and the population of Kraagend in general grew, people continued to build on to what was left of the building and it grew larger and larger.

From the outside, it's baffling how Destinus can even support its own weight these days. The exterior of the buildings themselves are dangerous, with random scraps, landings, balconies, chimneys, and more jutting from awkward places. Trying to find your way through the inside will have an outsider most likely lost in the labyrinth, and trying to find your way through the outside instead will almost certainly cause injury and infection. Even when Judges and their commands have to make their way inside Destinus they rely heavily on insider information. Traitors who give information to the City Council are often cast out of if discovered. Some make their own maps of the building but it is impossible to keep them up to date.

Most of the families who live within Destinus are honest families making their livings in honest ways. Within the walls are not only homes, but shops, apothecaries and doctors, cafes, grocery makets, carpenters, and anything else you could possibly of. The one thing Destinus doesn't have are Avlet kennels & hatcheries - it is illegal to have Avlets inside your home in Destinus due to size constraints, and the City Council is extremely harsh on prosecuting this. They claim it is for the good of the Avlets, and on some level it is, but some familes still take in small, weak Avlets that otherwise wouldn't have homes to run errands within the walled city at night. As tehse Avlets tend to be small and quick, it's not easy for Judges and their commands to catch them anyway.

While most people who live and work within Destinus are honest, there is definitely still a market here for black-market goods. Unauthorized tech, magic talismans, and miracle cures are peddled, hand to hand, mere whispers through the dark halls.

Kraagend City Council is a large building situated in the middle of the city, between the Sandspire and the front gates of Kraagend. This building houses the workplace of Kraagend's seven Judges and their commands who act as police. The building is beyond extravagant for normal constructrion in Mesesh, and is often vandalized for this very reason. The City Council is often viewed as corrupt, useless organization that does more harm than good. The only good thing they really serve is regulating the breeding, trade, and sale of exotic creatures, which does benefit the creatures themselves. Otherwise they pick and choose which crimes to prosecute and are more likely to nail you for petty theft, vandalizing, disturbing the peace, and owning technological or magical artifiacts than anything actually harmful to society as a whole. Serious robberies, arsons, and other much more dire crimes are often ignored by the Coucnil until such an uproar is caused that they have no choice but to deal with the issue. They collect taxes from all who live within Kraagend but it mostly goes straight into their own pockets.

Each Judge has their own jurisdiction, which is often how the community gave them their nicknames. Most of them are well aware of what the people call them, and have taken on the names meant to be criticism as actual titles.

Judge Halvard the Watcher is the judge who recruits informants. Most of his command attempt to infiltrate operations the Council is not fond of and gain information that can be used against them.

Judge Vedetta the Warden is one of the most feared Judges. Her jurisdiction is namely dealing with the prison, but also in dealing with criminals in general and deciding punishments and prison sentences. She is ruthless and you'd be best to stay out of her way when she comes around.

Judge Bao the Curator is a joke of a man who supposedly duties himself with bringing only the finest imported goods and merchants into Kraagend. Typically these aren't things that most people who live in Kraagend can afford, and honestly Bao doesn't do a good job attracting that kind of attention anyway. Mostly Bao concerns himself with being a glutton. He often shuts down various restaurants and markets for supposed "health code violations" if he decides he doesn't like their food or service.

Judge Farmond the Shepherd is the only Judge the community typically doesn't hate. Faramond is the one who regulates the breeding, sale, and trade of exotic creatures, namely Avlets. Surprisingly, they are a compassionate person, which is in stark constrast to the other Judges, but as they don't have much power over anything else, they try their best to stay in their own lane.

Judge Evard the Custodian is the Judge that prosecutes those who vandalize buildings and who tries to enforce building code. You can't simply buiild a home anywhere in Kraagend without getting a permit from Evard, and he doesn't hand them out, so they're often forged. He's so forgetful though that he can't remember what he did or didn't give out in the first place. Evard spends most of his time trying to fight with the residents of Destinus to get the place torn down, but his efforts don't really go anywhere.

Judge Alec the Sentinel is in charge of the guard command, who protect the city from Dune Wyrms. Overall Alec isn't totally hated because he does a necessary task, but sometimes he enforces conscription efforts when his command is sparse from deaths to Dune Wyrms. He has a pack of fighter Avlets at his command as well, who fight alongside the guard command to keep the people of Mesesh safe from outer harm.

Judge Lexine the Keeper is... well... No one really knows what she does. She keeps her mouth shut, hence the nickname.

The shopping district of Kraagend grew from what was originally a black market and is now a bustling market scene. It sprang up in a dark alley and is now a crowded series of stalls, buildings, and peddlers near the west side of Kraagend. Depending on what the shops sell, they sometimes are moved from where you last saw them due to being shut down by the Council and being forced to spring up elsewhere, but generally they will be somewhere nearby.

There are several NPC shops that you can buy and trade at. The shops include the following:

Sandtooth Apothecary - Run by Sanya the Antuin, this is a smelly shop where the best potions and salves can be found.

Wild Expanse Menagerie - Addy, a human, is the only person licensed by the Judges to sell the animals she finds. This is where you can find companions for your Avlets.

Clean Getaway Tack & Leatherworks - This shop is run by Anton the Druid and outside there are always leathers stretched out to dry. Here you can buy and trade leather and tack for your Avlets.

Glowing Door Tech & Scraps - Florianne the shopkeeper is an Avlet with a strange earpiece that allows them to understand and speak in the common language of Mesesh. She's always having to move, but will gladly buy up your metal scraps and sell you mysterious tech.

The Hulking Hog Butchery - Neeraj is a Fetch that is well-respected for keeping the citizens of Kraagend fed with meat and fish. His jerky is to die for.

Crystal Cavern Hatchery & Adopts - Indra is a kind elf who runs this orphanage for Avlets. Her team is the best of the best, and will give a home to unwanted Avlets or find them their perfect owners.

The Rare Shrine Supermarket - This large tented building is run by the Druid triplets Esme, Atila, and Melle. They do a lot of work keeping it stocked with the best products and supplies.

Pristine Peacock Bank - Alyse is an intelligent Fey who promises to keep your Fulgurite Shards safe. The building is the most secure and grand next to the City Council. 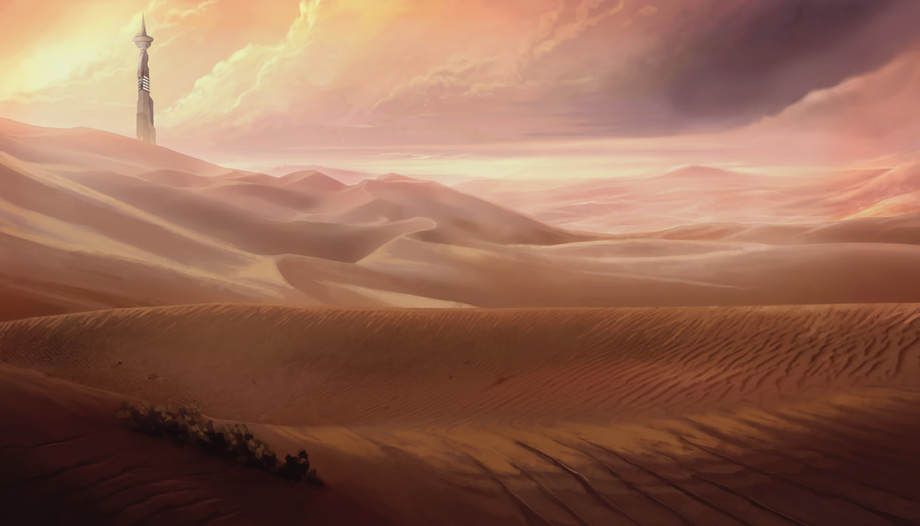 The Sandspire itself is pretty mysterious. A towering building that casts a shadow over the city of Kraagend and the deserts around, no one knows what on earth this building was used for. It stretches impossibly tall, you can't see the top from within Kraagend. No one knows what could be up there, and there's no known way to climb it. Ominous and looming, the Sandspire is sometimes a source of stress for the populace because no one knows what it could do next.

The Sandspire is also Kraagend's only source of water outside of importing from the Oases. There are a few entrances into the spire near the base that erupts from the sand, but there's no floor inside - it's a straight drop into a huge building that is flooded with water. The spire itself must have originally been only a tower on top of this building. It's too vast and dark to be explored. Those who have tried have vanished without a trace into the depths below. Very rarely, disturbances across the surface have been spotted, but it's so dark that no one knows what could cause the ripples and waves. Several pulley systems have been set up for retrieving water, which can then be boiled to ensure its safety.

This is also supposedly where Avlets originated. The first gemstones and cubs were found here - no one really remembers how the tale goes, but something inside seems to have dropped them at one of the entrances to the spire from Kraagend.